The opening day of the fourth edition of the T10 League was a memorable one for UAE batsman Abdul Shakoor. Playing for the Maratha Arabians, he smacked 73 runs off just 28 balls smashing seven fours and five sixes. It was due to his knock that the Arabians managed to chase down 128 runs in 10 overs.

The 32-year-old Shakoor was delighted after his blitzkrieg and now feels that this could change the priorities for the T10 franchises. He hopes for a change in their approach and expects that his knock will give more chances to UAE players.

“It’s a very big achievement for me and the UAE cricket because there are some other players who can also do well in the upcoming matches. The franchises are now going to look for more UAE players. They should give them the chance, so they can prove themselves, Shakoor was quoted as saying by Khaleej Times.

Abdul Shakoor has played for the UAE before at the international level and has donned his country’s jersey in 3 ODIs and 6 T20Is. After his latest knock in the T10 League, he is now hoping to make a comeback in the UAE side at the highest level again.

“I can’t really tell you in words how happy I was after scoring the half century because it’s a big achievement for me and for my family and my team. Now I hope to do better when I get a chance to play for the UAE again,” he further added.

Having said that Shakoor will have to be consistent in the rest of the matches as well if he wants to make an international comeback and even lead the Arabians to the title. 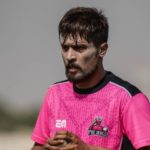 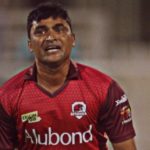