Sunrisers Hyderabad were dealt with a massive blow as T Natarajan has been ruled out the remainder of IPL 2021 due to a knee injury, reported Cricbuzz. The 30 year old pacer played just two matches for SRH before being rested. Now as per the reports, his knee injury has been aggravated and the left arm pacer has been advised to not take further part in the tournament.

As per the sources, Natarajan could be asked to report back to the National Cricket Academy in Bangalore. It is still uncertain that at what stage did the pacer, who spent two months at the NCA after a successful tour of Australia aggravated the injury.

“We have not got the full report but we have been told that he has developed a strain in the knee. He will have to undergo rehab in the NCA,” the source was quoted as saying by Cricbuzz.

Earlier, David Warner revealed that Natarajan is set to miss few games for SRH as his injury is still under the scans.

“He has obviously got a sore knee. Given the circumstance in these bubbles, if he goes and gets a scan, he obviously has to sit out for seven days. He has to get back in quarantine. We are just monitoring him at the moment. The physios are doing their best to analyze from a face point of view but he obviously has to go out and get a scan at some point,” Warner said on Wednesday.

There is some news on the fitness of Ishant Sharma as well. Ishant Sharma hasn’t played a game for Delhi Capitals in the IPL 2021. Many thought that he hasn’t been selected as he doesn’t fit in the team combination. However, it is understood that Ishant was unavailable for selection as he wasn’t fully fit. But he seems to have recovered and is available for selection for DC’s next game. 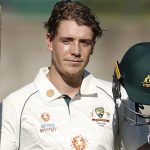