Sri Lanka have named the 30 member squad for their upcoming series against South Africa. The teams will cross swords in 3 ODIs and as many T20Is starting September 2. Veteran wicketkeeper-batsman Dinesh Chandimal has been drafted back into the side after being dropped for the series against England and India. Chandimal has represented Sri Lanka in 149 ODIs and 57 T20Is, scoring 3696 and 868 runs respectively.

Meanwhile, Kusal Perera makes his return to the side after missing the India series due to a shoulder injury. The hosts will be high on confidence after an impressive T20I series win over India and it will be interesting to see if they can replicate their performance against Proteas as well.

The tour will kick off with the ODIs, starting September 2, followed by matches on September 4 and 7. The T20Is will be played on September 10, 12 and 14. R Premadasa Stadium in Colombo will play host to the six white-ball matches of the tour. 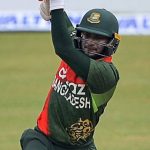