India and Pakistan will face each other for the second time in the Asia Cup 2022. In the first match, the Indians won the match by five wickets on the backs of the all-round heroics of Hardik Pandya. Both teams will be eyeing to win their super-four round of the tournament.

The men in blue will have to make changes in the playing XI for the match against Babar & co. In the same regard, coach Rahul Dravid has ruled the young pacer Avesh Khan out of the plans for the next match. Fans have also reacted to this decision from the management. They took to Twitter for taking a dig after the exclusion of Avesh Khan from the final XI of team India.

Fans also went on to say it was a ‘masterstroke’ by the head coach and management. Notably, Avesh performed very poorly in the last match against Hong Kong. He conceded 53 runs in his quota of four overs.

Here’s how Twitter reacted after the  exclusion of Avesh Khan:

Masterstroke by bcci to bring in chahar!!🥵 https://t.co/rXKt5VlYH7

We know he was unwell after that spell against HKG🙂 https://t.co/kXTa96tIzB

While talking about Avesh, head coach Rahul Dravid said in the pre-match press conference that the 25-year-old is down with fever so he would not be a part of the team for the next match against Pakistan.

“Avesh is feeling a little bit unwell, just been under the favor, a little bit of fever, doctors are managing the situation, he is not at practice today hopefully he is not too serious and should be okay for tomorrow’s game (against PAK), if not, then later part of the tournament,” said Rahul Dravid.

Apart from this, both India and Pakistan are facing injury issues before the commencement of the Asia Cup 2022. Firstly, Jasprit Bumrah and Shaheen Afridi were ruled out of the entire tournament due to their respective injuries.  Whereas, in a recent piece of news, India faced a big blow when senior all-rounder Ravindra Jadeja sustained a knee injury and got ruled out of the remaining part of the tournament. Other than this, he will also have to sit outside of the squad of the team in the T20 World Cup 2022.

On the other hand, young pacer Shahnawaz Dahani has sustained a side strain injury just ahead of the super-4 match against India. 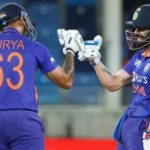