Dennis Lillee dominated the world’s best batters during the 70s and 80s and accounted for 355 Test wickets and 103 ODI wickets in 70 and 63 matches respectively. He was known for his express pace and ruthless aggression. Talking about Wasim Akram, ‘Sultan of Swing’, played 104 Test matches for Pakistan, bagging 414 wickets at an average of 23.6, and 356 One-day Internationals (ODIs) capturing 502 wickets at 23.5.

Next was the West Indies trio of Marcom Marshall, Curtly Ambrose and Michael Holding. The Caribbean giants wreaked havoc with their fiery bowling. Marshall and Holding formed a lethal pace bowling duo in the late 70s and 80s and accounted for over 900 wickets across formats. Holding accounted for 249 and 142 wickets in 60 Tests and 102 ODIs respectively while Marshall scalped 376 and 157 wickets in 81 Tests and 136 ODIs. Meanwhile, Curly Ambrose played 98 Tests and 176 ODIs, picking up 405 and 225 wickets respectively.

Also in the list is veteran England pacer James Anderson, who is going strong even at 39. The right armer is the leading wicket-taker among the pacers in Test cricket with 630 wickets in 165 Tests. Overall, he has more than 900 International wickets. His ability to swing the ball both ways and hit the mark almost every time is just remarkable. Anderson has been on fire in the ongoing series against India and got the better of Indian skipper Virat Kohli on two occasions.

Warne also included fellow Australian Glenn MacGrath in his list. McGrath was an integral part of the Australian unit that dominated world cricket during the early 2000s. McGrath has 653 and 381 wickets against his name in 124 Tests and 250 ODIs respectively. South Africa legend Dale Steyn, who recently announced his retirement from all forms of cricket also made it to the list. Steyn represented South Africa in 93 Test, 125 ODIs, and 47 T20Is, picking up 439, 196 and 64 wickets respectively. 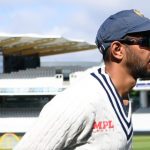