Former Pakistan cricketer Shahid Afridi has confirmed that Pakistan pacer Shaheen Afridi is engaged to his daughter Aqsa. Afridi, in an interview with a private channel, said that by God’s will, Shaheen will become his son in law in future. He further revealed that his daughter wants to become a doctor but she in a dilemma whether to pursue her education in Pakistan or England.

Afridi also revealed that Shaheen and Aqsa’s marriage was decided by the families and the couple had no relations before, adding that Shaheen’s parents had strong desires that both families should convert their acquaintances into a formal relationship.

“We Afridis have eight tribes, Shaheen and we belong to different tribes,” the former captain noted.

Earlier, Shaheen’s father Ayaz Khan confirmed that his son will be getting married to Shahid Afridi’s daughter Aqsa.

“With permission from both families, I would like to clarify the engagement rumours between Shaheen Afridi and the daughter of Shahid Afridi. The proposal has been accepted; it is thought that a formal engagement will be done within 2 yrs, following the completion of her education,” he tweeted.

“The reason behind this tweet is to clarify the suspicion caused by social media. With respect to both families; please do await their own official announcements as they are currently in talks. I would like to request all individuals to respect their privacy during this auspicious time,” he added.

Shahid Afridi and Shaheen Afridi will be seen in action as the PSL-6 is set to resume from June 5 in Abu Dhabi. Shaheen was in fine form before the tournament was postponed and bagged nine wickets in four games for Lahore Qalandars. Shahid Aridi, on the other hand, picked five wickets for Multan Sultans. 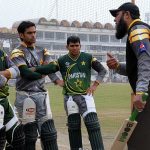