Former South Africa cricketer Herschelle Gibbs is not impressed with BCCI’s interference in the Kashmir Premier League (KPL). The 47-year-old termed the events as sad and disappointing and felt politics should be kept aside when matters are related to sport. The former South Africa opener found it bizarre that the BCCI interfered in the matter related to him playing in KPL. After a lot of deliberation, Gibbs has confirmed his participation in the league for the Overseas Warriors.

“No, there is no pressure on me whatsoever. I have been traveling for so many years to all cricket-playing countries without interference from the BCCI. I found it very strange and bizarre that they wanted to interfere with my business all of a sudden when I was coming to the Kashmir Premier League. For me, it is no politics. I just go where there is cricket being played. Kashmir is another place where they are playing cricket and that is the way I look at it. That is why I find it bizarre that the BCCI interfered all of a sudden and wanted to prevent me from coming here,” Gibbs said.

Gibbs has been to India a lot of time while playing cricket and for commentary during the Indian Premier League (IPL). But since India and Pakistan don’t share the best of the equations owing to political tension, Gibbs was threatened by BCCI and told he will be denied entry in India. Gibbs said that way BCCI handled the situation was disappointing.

“It was a little sad in a lot of ways because I have worked lots of times in India and have a lot of friends there. For them to want to step in and interfere and prevent me from coming here and threaten me by saying that I would be denied entry in India is sad and disappointing. I have never liked politics in sports. There is a lot of politics back home in South Africa cricket too. It’s really sad when politics get involved in sports,” he added.

The KPL, however, started on a positive note and gained 15 million views in three days. The matches are being played in Muzaffarabad, a beautiful town in Kashmir. Gibbs was amused by the beauty and compared it to Switzerland.

“It’s beautiful. It’s a wonderful opportunity to play. It’s an inaugural time for the league. It’s nice to be part of a new league for the first time. The location and the venue are fantastic. I think the games have been highly entertaining. I think the league couldn’t have asked for a better start. Entertainment is what T20 cricket is all about and it has been a fantastic start,” he said. 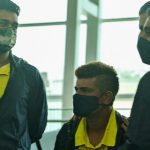