The third Test between South Africa and India is proving to be an absolute cracker of a contest. Just when one team seems to have an advantage, the other team somehow manages to make a comeback, and make it even once again.

However, alongside the game, there have already been a few heated moments in this series. The most recent one was that of the Indian Test captain Virat Kohli arguing with the umpire on the second day of the Newlands Test. Marais Erasmus, who happens to be the on-field umpire for the ongoing third Test, had given an official warning to Mohammed Shami for running in the danger area during the first session of day two.

Apparently, this didn’t sit well with the Indian skipper. Kohli was then seen arguing with Erasmus, as he kept saying that Shami did not step on the danger area during his follow-up. It is to be noted that umpires do have the right to warn the bowlers from staying away from the danger area.

This is generally done to ensure that the pitch doesn’t deteriorate faster than normal. However, the replays showed that the Indian pacer was clear of the protected area, and was bowling relatively close to the umpire. Nevertheless, the images of Kohli arguing with Erasmus instantly became viral.

As several fans shared the images on Twitter, many of them felt that the 33-year-old did the right thing for taking a stand for his teammate.

Nevertheless, after winning the toss and electing to bat first, India were bundled for 223. In reply, the hosts too got off to a poor start. However, Keegan Pietersen and Rassie van der Dussed stabilised the inning. Just as when it looked like South Africa will take a big leap in the match, a magnificent spell by Mohammed Shami brought India back in the game.

South Africa have been reduced to 182-8 at the time of writing, still trailing by 41 runs.

Here is our king @imVkohli fighting for Shami as he was given an official warning for running in the danger area in the bowling follow through. The replays showed he was well away from that red danger mark. #IndvSA King is back in his old form. Come Onnnnn! 🇮🇳 pic.twitter.com/MsQ6742hlK 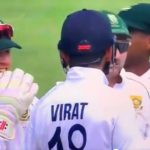 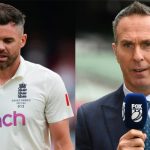