India won the third T20I match of the ongoing T20I series against South Africa after losing two on the trot. The win came as a relief to many as India now has a chance to win the trophy if they win the remaining two games.

In a light-hearted post-match conversation, Ruturaj Gaikwad and Yuzvendra Chahal shared a light chuckle regarding Gaikwad’s core strength and motivation for going to the gym.

While talking about Gaikwad’s five fours against Anrich Nortje in the fifth over, Chahal asks, “What was your thought process behind hitting five fours in an over? You used your helmet, bat and also your core. You also tucked.” To which the opener replies, “our workout which is going on, thanks to our two trainers, is very good.”

Enjoy this special segment of @yuzi_chahal chatting up with @Ruutu1331 after #TeamIndia's win in Vizag. 👌 👌 – By @28anand

He further adds, “When we see people like you in the gym, we can be motivated.” To which the spinner chuckingly asks, “people like us?”

Both the players had a really good last match against South Africa. Coming to bat first, the opener from Pune hit a spectacular half-century of 57 in 35 balls. The knock included seven fours and two sixes.

The right-arm spinner also came up with a match-winning performance by putting pressure on the Proteas batters. Chahal was instrumental in team India’s win, taking three important wickets in four overs. His wickets of in-form batting duo Rassie van der Dussen and Heinrich Klassen broke South Africa’s back and the game was already lost after Harshal Patel got David Miller out a few overs later.

India are going to play the fourth match of this T20I series on June 16th in Rajkot. This will be a very important game for Men in Blue their can’t afford to lose a game further. 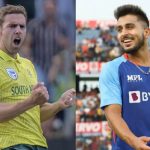