They say life at the top is not easy. A perfect example of that is the constantly changing ICC Men’s batting rankings. It’s hard for a batter to keep himself at the top of the list for a long period of time. With a match-winning century against New Zealand, the ex-England captain Joe Root has again reshuffled the Men’s Test Batting rankings.

With a rating of 882, the right-handed batsman has now moved to second in the Men’s Test Batting Rankings. Marnus Labuschagne continues to sit at the perch with a rating of 892, ten more than the English batter. With Root moving two positions, Steve Smith had to vacate the second spot and fall back to third.

While the English batter continues to rise, the same cannot be said about his New Zealand counterpart, Kane Williamson. A score of 2 and 15 saw the Kiwi captain drop to 5, giving way for the Pakistan captain Babar Azam who now occupies the fourth spot. Besides, the Indian players Rohit Sharma and Virat Kohli languish at eighth and tenth respectively.

Along with improving his ranking, Root’s century has also help him count among some of the Test greats of the world. He has now become the 14th overall and only the second English player to make 10,000 runs in Tests. The English batter shares this feat with Sir Alastair Cook, another English great.

Bowler’s Ranking has also been shuffled with Kyle Jamieson moving up two places to claim the third spot, while Indian pacer Jasprit Bumrah and Pakistan left-arm quick Shaheen Shah Afridi drop one spot each to occupy fourth and fifth respectively.

The Australian captain Pat Cummins retains his top spot with a rating of 901, while the Indian spinner Ravichandran Ashwin trails by 51 points on the second spot.

The All-Rounder’s rankings at the top remain unchanged with Ravindra Jadeja, Ravichandran Ashwin and Jason Holder occupying the first three spots. The only change in the top ten has been the upward movement of Pat Cummins to seventh and a drop of one position in the ranking of Kyle Jamieson (8). 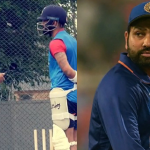