Having given the target of 270, Rizwan and Usman came together as UAE struggled on 51 for three in the 13th over. The duo calmly built the innings until Rizwan was out for 109. UAE still needed 35 runs to win.

A sensational unbeaten 10-ball 18 from Waheed Ahmed helped the side to grab the win at home with an over to spare. The experienced player Usman finished on 102 not out. Ireland skipper Andy Balbirnie won the toss and decided to bat first. The batsman further added that the side is hugely disappointed with the result as they are here to win games.

Opening batsman Paul Stirling settled himself superbly to bat through the innings. He also managed to claim his tenth One Day International century. The Irish cricketer’s 131 not out came off 148 balls. His innings included nine boundaries and four sixes. The 30-year-old shared a second-wicket partnership of 102 with Balbirnie who made 53 from 61 balls. The innings stumbled with the dismissal of the captain.

Ireland scored 269 for five from their 50 overs

Leinster pacer Barry McCarthy pulled out opening batsman Zawar Farid and Vriitya Aravind. Rizwan and Usman scored 32 and 35 respectively for the next 33 overs to turn the game back to the hosts. Rizwan, who is originally from Kerala, smashed nine fours and a six in his 136-ball 109. On the other hand, Usman’s unbeaten 102 came from 107 balls, and it included seven boundaries and three sixes.

The second ODI is going to take place on Sunday. The hosts are again going to be without vice-captain Chirag Suri and left-arm spinner Aryan Lakra. Both the players missed Friday’s opener after testing positive for COVID-19. After the UAE series, Ireland will stay in the country to play three ODIs against Afghanistan. 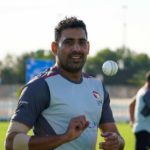 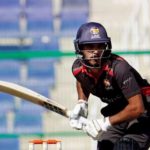