Rishabh Pant has been named as the ICC men’s player of the month. Pant, who has been in fine form of late edged past the likes of Joe Root and Paul Stirling in the voting. Pant is turning on the heat with his batting and has played three match defining knocks in the last three matches. He smacked a brilliant 97 in Sydney against Australia to help India secured a draw and then back it up with a scintillating 89* in Brisbane, leading India to a famous victory. Against England in the first Test at home, Pant once again looked in fine form and scored a brilliant 91.

“Pant’s heroics in the final two tests against Australia will be folklore stuff, particularly given the circumstances: the strength of opposition and the extraordinary level of expectations from his fans.” “With these knocks Pant has given a life lesson too – that success comes to those who WILL and DARE,.”said ICC voting Academy Member and journalist Mona Parthsarthi accoring to the official page of the ICC.

Rishabh Pant, Joe Root and Paul Stirling were shortlisted for the award considering their performances in the last month. The nominees were then voted by the members of the ICC Voting academy members which includes senior journalists, former players, broadcasters and the members of the ICC Hall of Fame. The voting academy members had a vote share of 90% while the fans had 10% share of the vote. 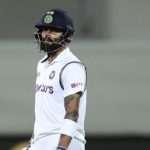