The covid-19 virus has once again struck the Peshawar Zalmi camp as members of the team have tested have positive ahead of the playoffs. Three members have been reportedly delivered positive results after the final league game match against Lahore Qalandars In PSL 2022.

According to the norms set by the Pakistan Cricket Board (PCB), the positive members will have to stay in isolation for 7 days before rejoining the team. Thus, the players won’t take any part in the Eliminator. Peshawar Zalmi is supposed to play the Eliminator against Islamabad United on the 24th of February.

However, these players can return to the team if they qualify for the final. Peshawar Zalmi recently beat Lahore Qalandars in the final game of the league stage. Captain Wahab Riaz has to be credited for the team’s win. He conceded just 5 runs in the Super over after Shaheen Afridi almost snatched a win for Lahore.

They ended the league stage at the third position with 12 points in 12 games. They will have to beat Islamabad United and the loser of the Qualifier to reach the final. The qualifier will be played between Multan Sultans and Lahore Qalandars on the 23rd of February.

Peshawar Zalmi is the team with the most appearances in the final but they were able to win the title only once. The last time they won PSL was in 2017. 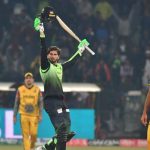