Karachi Kings opener, Sharjeel Khan, who stroked a magnificent hundred against Islamabad United in the 6th match of the PSL has said that good performances in the PSL can boost a player’s confidence. Sharjeel was speaking at the post-match interview and said that he’ll look to carry his good form in the upcoming matches of the PSL as well.

“I am thankful to Allah that I could play such a knock. I was waiting for such an innings from myself, an innings that would bring back my confidence completely. I am feeling really good now. I am now even more confident in terms of batting. I will try to carry this forward. I scored the first century in the HBL PSL for Islamabad and now I have scored my second century against them. I feel really good,” Sharjeel said.

“I have had a great season. I have been in good touch and have been playing a lot, but this (HBL PSL) is a platform that can double your confidence. I don’t think there are any doubts left after playing at this platform. I will keep trying to play this way for my team and continue my form,” he added.

He further added that T20 is a format where just one player can change the complexion of the game. Talking about Karachi Kings, he said that the tournament is still in its early stages and one loss won’t hurt their chances. He said that they’ll aim to deliver a better performance in the next match.

“In the T20 format, one player can change the entire game. We bowled well, but also didn’t (in some cases). We will talk about our mistakes and try to minimise them in the future. It is a T20 tournament with good matches and great competition. All teams are equal. We will try to do well in the future,” he said.

“We will try to do what we did last year. We started well and won the first game. The tournament is only in its initial stage. Many changes will come as far as which side goes up or down the table. We will try to give our 100 percent in each game,” he added.

Sharjeel’s century went in vain as Islamabad United chased the total of 196 with just 5 wickets down. Alex Hales set the tone for the chase with a 21 ball 46 while Iftikhar Ahmed and Hussain Talat also played crucial knocks. 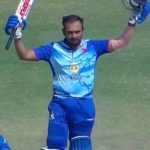