The COVID-19 cases continue to come thick and fast in the West Indies camp on the Pakistan tour as five more members of the contingent have returned positive. Shai Hope, Justin Greaves, and Akeal Hosein are the three players to test positive, while bowling coach Roddy Estwick and physician Akshai Mansingh are the two non-playing members to deliver a positive report.

The five members are in isolation and won’t take any further part in the T20I series. Earlier, Roston Chase, Sheldon Cottrell, and Kyle Mayers were ruled out of the series after testing positive for COVID-19.

“A further five members of the West Indies touring party have tested positive for COVID-19,” tweeted the official handle of West Indies cricket.

A further five members of the West Indies touring party have tested positive for COVID-19 | More below: https://t.co/lOhSH1UdIu

West Indies are trailing the three-match T20I series 2-0. The visitors went down by 63 runs in the first game and lost by nine wickets in the second match in Karachi. The third and final T20I is a dead rubber and will be played on Thursday (December 16).

Next up, the teams will play a three-match ODI series, which will be part of the World Cup Super League. The series is vital for both teams in getting some valuable points and secure automatic qualification for the 50-over World Cup. The three ODIs will be played in the National Stadium in Karachi from December 18. However, the recent developments has put the fate of series in jeopardy.

Shai Hope was supposed to lead the West Indies team in the three-match ODI series in the absence of Kieron Pollard. Hope is unavailable and it remains to be seen if Nicholas Pooran takes charge of leadership in the ODIs as well. Meanwhile, Pakistan have continued their stellar form in T20Is in 2021. They have won six out of seven T20I series played this year. 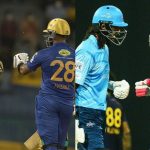