India’s women pace sensation Shikha Pandey again made a comeback in the Women’s ODI rankings for bowlers by the International Cricket Council (ICC) as she climbed one spot to reach 10th position. Interestingly, the right-arm seamer last featured in a One Day International for India in November 2019 and gave the just-concluded ODI series against South Africa a miss.

The top spot in the rankings is acquired by Jess Jonassen while Australia’s Megan Schutt reached the second spot after her stunning performance in the ODI game against New Zealand. As far as the other Indian bowlers are concerned, Jhulan Goswami retained her number 5 position in the bowler’s rankings while Poonam Yadav is placed at Number 8.

Coming to the women’s ODI batting rankings, Tammy Beaumont is leading the charts with 765 points under her belt while South Africa’s Lizelle Lee has retained the No. 2 spot. Australia’s celebrated batter Alyssa Healy also saw a rise in her batting rankings as she climbed two spots to reach 3rd position with 753 points to her name.

Smriti Mandhana and skipper Mithali Raj are the only two batswomen to feature in the elite list from India. Smriti is placed on 7th place with 710 points followed by Mithali, who has 709 points. Another noteworthy in the list is Ellyse Perry, who retained the ninth position with 701 points.

There is only one Indian all-rounder to feature in women all-rounder rankings for ODIs and that is Deepti Sharma, who’s settled at 5th place with 343 points. The slight change in the rankings came after Australia scripted a victory over New Zealand by six wickets to register their 22nd consecutive ODI win. 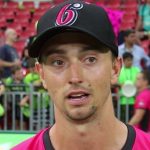