Rajasthan batter, Daryl Mitchell has left the bio-bubble ahead of an important game against Bangalore on Friday. The New Zealand cricketer, reportedly, has left the bubble to join the New Zealand squad in England for the upcoming Test series against England.

Mitchell will be available for New Zealand for the practice match against the First Class Counties XI. The match is scheduled to start on 26th May in Chelmsford. His countrymen, namely Trent Boult and Jimmy Neesham, however, will remain with the Rajasthan squad.

In a video shared by Rajasthan, Director of Cricket Kumar Sangakkara said, “Daryl’s been with us right from the start, he’s been an exceptional part of our group. He’s done a huge amount for us in terms of energy, being the character that he is, helping out, supporting, playing, fielding, and getting to know each of us.”

“So we have asked everyone from the start to give a little bit of themselves to the group and Daryl has done an amazing job for us. We wish you very well for the series against England. There’s a practice game on 26th, we will (be) watching and supporting.”

Daryl Mitchell has played 2 games for Rajasthan this season. On leaving the bio-bubble, Mitchell said, “It’s obviously sad to leave at such a crucial time, but I will definitely be watching and looking forward to the video call of the (team) lifting up the trophy.”

For the unversed, New Zealand are set to play three-match Test series against England. The first Test is scheduled to be played from 2nd June to 6th June 2022.

Meanwhile, Rajasthan are slated to play the qualifier 2 match against Bangalore on Friday at Narendra Modi Stadium in Ahmedabad. Rajasthan finished second on the table after the league stage. Sanju Samson and Co. lost the Qualifier 1 match against Gujarat by 7 wickets. They still have a chance to reach the final and Rajasthan would look to showcase their best performance on Friday. 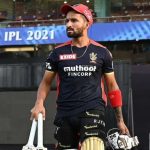