India will square off against New Zealand in the final of the World Test Championship, scheduled from June 18 to June 22 at the Ageas Bowl in Southampton. With the summit clash just a few days away, former Indian cricketers Parthiv Patel and Irfan Pathan predicted the highest run-getter and wicket-taker.

The former wicketkeeper-batsman Parthiv backed India to win. Patel believes that Cheteshwar Pujara will be the highest run-getter and will put India in a very good position if he bats for three to four hours. He further chose Mohammed Shami as the highest wicket-taker. Though the keeper admitted that Jaspirt Bumrah and Ishant Sharam have done considerably well, he believes that Shami holds the key for India.

However, former Indian all-rounder, Irfan Pathan didn’t echo the same sentiments and hailed New Zealand as the favourites to win the contest. Irfan backed NZ skipper Kane Williamson to be the highest run-scorer while picking Trent Boult and Shami to take the most number of wickets.

“WTC Final, it’s the biggest Test match ever. I think New Zealand will have a 55-45 advantage. I also think Kane Williamson will be the highest scorer. And, in terms of highest wicket-taker, it will be between Trent Boult and Mohammad Shami,” Irfan said. 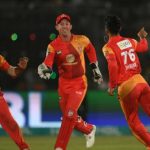