Virat Kohli decided to step down as India’s Test captain on Saturday, exactly a day after his team’s Test series loss against South Africa. He had led the Indian team for seven years in whites and under his reign, Team India stayed number one in the Test rankings for 42 months. What Kohli achieved as Test captain will be hard to replicate. As Virat Kohli relinquished his Test captaincy, various cricketers from Pakistan came forward and congratulated him on a remarkable captaincy tenure. They included the likes of Azhar Mahmood, Mohammad Amir, etc. Here are some of the reactions.

@imVkohli brother for me u are a true leader of upcoming generation in cricket because u are inspiration for young Cricketers. keep rocking on and of the field. pic.twitter.com/0ayJoaCC3k

That flare of passion with which you led your side was visible in your captaincy. It’s been 7 years of fearless leadership, quality spirit of cricket and a great ambassadorship of the game. Best wishes for the future bro @imVkohli, keep rocking 🤙🏼 https://t.co/G2BcSTzIRM

Veteran all-rounder Azhar Mahmood termed Virat Kohli’s captaincy tenure as a ‘remarkable’ journey and lauded him for his achievements.

A remarkable journey, career and perseverance which brought us great cricket and entertainment. A brilliant inspiring player of the sport takes a bow. Well done @imVkohli in all your efforts and leading a team with such poise and dignity. Go well ! https://t.co/fLBhjtbNor

You are the inspiration for many! https://t.co/0xa9mVAoHv

Under Virat Kohli’s reign, Team India won 40 out of 68 Test matches. Virat had led India to their maiden Test series win on Australian soil in the 2018/19 season and then replicated the success in 2020-21. Under him, the current top-ranked Test side had also taken a 2-1 lead in England, with the fifth and final Test scheduled to be played in July this year.

Meanwhile, Virat Kohli’s successor in the longest format is yet to be announced and as per reports, KL Rahul and Rohit Sharma are frontrunners for the role. 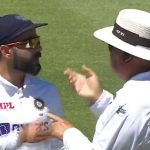