Social media is a powerful tool that can make or break fortunes. If used effectively, it has loads of benefits but misusing it may cause some serious damage. Something similar happened with England pacer Ollie Robinson whose career is in jeopardy after several of his old ‘racist and sexist’ tweets resurfaced on internet on the biggest day of his career, his international debut. Consequently, the pacer was suspended by the England Cricket Board (ECB).

While many experts have supported ECB’s ban, they have also requested the board not to be too harsh on the pacer as people mature over time. The latest to join the bandwagon is former West Indian great Michael Holding who believes that Ollie Robinson should be given a second chance. Robinson also found support from his teammates who said they have accepted his apology.

“Yes, suspend him because you want to investigate. You don’t allow him to continue playing, like on Thursday, while an investigation is going on at the same time, because if you find out things that are horrible coming out in that investigation. “But do it quickly, let’s get it over with quickly.”

It is also learnt that ECB is investigating another player for his old derogatory tweets. However, they have decided to keep mum on his identity as he was a minor when he posted those tweets. Commenting on the same, Holding said that ECB should look into the matter if he has repeatedly posted such offensive stuff.

“…we all make mistakes as young people, but if we can recognise those mistakes and correct them, and change our lives to recognise that was rubbish, and then do the right thing going forward,” he said. “I am someone who likes to give someone second chances, or even third chances.” 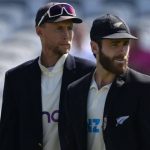