Ahead of the mega auction, there were several England players who were expected to earn big bucks this time around. Liam Livingstone happened to be one of them. Owing to his all-round skills, many cricket pundits expected him to fetch millions. They weren’t wrong as the moment his name popped up, several teams went after him. A massive bidding war between various franchises ensured that the all-rounder earned a fortune in this auction. At the end, Punjab got him for a whopping amount of INR 11.5 crore. His ability to consistently hit the big shots is his USP. Add to that his skills with ball. Thus, he can be said a complete package.

As a matter of fact, his bowling has significantly improved in the recent past. Thus, by acquiring Livingstone, Punjab have strengthened their batting. In fact, Punjab’s team already consists of a lot of aggressive players.

The batting all-rounder will be seen playing alongside his English teammate Jonny Bairstow. Besides, they already have some hard-hitters from India, in the form of Mayank Agarwal, Shikhar Dhawan and Shahrukh Khan. When it comes to Livingston’s career in the Indian T20 league, he was earlier with Rajasthan. He played a few games in the previous edition in 2021 as well.

In the nine games he has played in the toughest 20 league so far, the batting all-rounder has scored 112 runs at an average of 14.0. His strike rate is 125.8. However, he was the Most Valuable Player of the ECB’s inaugural The Hundred competition. Thus, it is to be seen if he can live up to the expectations, and deliver for the Punjab-based franchise.

🚨 Liam Livingstone becomes the most expensive overseas buy in this auction yet!

Liam Livingstone madness in auction. But 10cr is too much, overpriced.

Is your Sunday going as good as Liam Livingstone's? 😀 #IPLAuction

Top 7 of Punjab Kings so far.

This bid for Liam Livingstone isn't for a pure batsman. #PunjabKings will want 2-3 overs from him 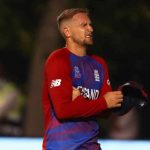