India women clinched a stupendous series win against England Women. The Harmanpreet Kaur-led team won the series 3-0 and made the entire country proud. However, the win against England women in the third ODI turned out to be an anti-climatic one as Deepti Sharma came up with a run-out at the non-striker’s end.

This led to a lot of backlash for the player and Deepti had to bear the brunt. Stuart Broad, England’s lead pacer, slammed the player and called the win ‘terrible’. Sam Billings, the pacer’s teammate joined the list of those who trolled the win and said that it was unacceptable.

Meanwhile, in India, Mohammad Kaif was the one who went against Deepti Sharma and said that the bowler must not stop delivering the ball. The former India cricketer took to Twitter to give his opinion and faced backlash in turn for the same.

“Every batter times his/her start when they are at non-striker end. After years of playing they are mentally programmed when the ball will be released as they are focusing on striker. If a bowler doesn’t release the ball it’s unfair on batter,” Mohammad Kaif said on Twitter.

Every batter times his/her start when they are at non-striker end. After years of playing they are mentally programmed when the ball will be released as they are focusing on striker. If a bowler doesn't release the ball it's unfair on batter.

Right after he came up with the tweet, fans on Twitter slammed the former cricketer. A few claimed that the player must have not come up with the opinion if he had anything against Deepti Sharma. A few others claimed that he must take a flight to London.

Harmanpreet Kaur, the Indian skipper, did not shy away from backing the bowler. Further, she took a stand and backed the team despite facing the crowd’s booing at Lord’s. One has to appreciate her courage in standing up for the team too if one wants to stand with team India.

“To be honest, I thought you will ask about all the 10 wickets which was not easy to take as well [on being probed about the last wicket]. It’s part of the game I don’t think we have done something new. It shows your awareness, what batters are doing. I will back my players, she hasn’t done something outside the rules. At the end of the day a win is a win and we will take that,” Harmanpreet Kaur said after the match.

However, let’s take a look at the tweets from fans who trolled Mohammad Kaif

@StarSportsIndia time to remove him from the commentary team😂🤣 https://t.co/XbgyAQ9Oog

Kaif bhai…some players do learn the back up while focusing on the striker https://t.co/hWhsIEoP3h

By that logic sir, the batters who are facing 150 kmph Speedsters will also consider it "unfair" when they bowl slower balls because they are "expecting" 150 kmph and not 110 kmph.

One can't be "programmed" in new age cricket

Sorry to say this but is within the law

It's time to change the mindset as a batsmen. You should have a look your legs where it is with in the crease or not?otherwise you getting out by the bowler as simple as that…

Update the program or get out. 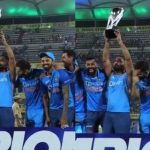 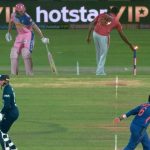