Ahead of the 1st T20 between India and England, Virat Kohli has confirmed that they’ll go in with Rohit Sharma and KL Rahul as the openers. As per a tweet from CricketNext, Kohli said that Rohit and Rahul have been consistently performing and there is no need to tweak a combination that’s done well in the past. The Indian skipper added that Shikhar will only get a spot in the playing XI if either of them is rested.

“If Rohit plays, it’s simple. KL and Rohit have been consistently performing at the top. If either of them take rest, Shikhar is the third opener. Rohit and Rahul will start,” said Kohli

Kohli also brushed the possibilities of Ravichandran Ashwin making a comeback into the Indian squad. Kohli said that Washington Sundar has been doing well for India and they can’t have two similar players in the squad. Kohli added that unless Sundar has a horrible series, he doesn’t see Ashwin make a cut to the squad.

“Washington has been doing really well for us, so you can’t have two similar players in the side. Unless Washington has a horribly bad season, I don’t see it… you have to have some logic when asking the question, you tell me where would you fit in Ash,” he added

Talking about Varun Chakravarthy failing the fitness test, Kohli said that they’ll not compromise on the fitness of a player. He added that the players need to meet the standard set by the Indian team.

“Individuals have to understand the system created for the Indian team. You have to operate at very high levels of fitness. You’d expect players to abide by what’s required for team India. No compromises”. When asked if India were the favourites to win the World Cup, Kohli transferred the tag to England and said that they’re the number one T20 team and will start the tournament as favourites. He added that every team will be wary of the quality they bring in.

“No, England will be the team to beat. They’re the number 1 side in the world. Prime focus will be on them. All other teams will be wary of the strengths they bring to the park. Every other team will agree with me.”

Kohli also hinted that the Indian squad for the T20 World Cup will be pretty much the same they have for the upcoming series against England.

“We have played with a certain pattern in the past. We didn’t have a big tournament to work towards. The additions in the squad, we’ve tried to add a few things in specific”.

“Guys who can be X factors with the bat, do things that are need of the hour in T20 cricket. We’ve tried to cover all the bases, now it’ll be interesting to see how they go in the five games. The squad we have now minus Jaddu is the most balanced to take the field,” he signed off. 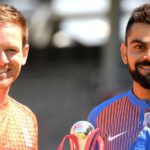