The Indian team is currently without KL Rahul as he got injured at the very last minute. The team management put the Delhi captain Rishabh Pant as a stand-in captain in the absence of the former.

The Lucknow captain has had a horrible time with injury when it comes to playing for the national side. The last year, in particular, was unlucky for the right-hand batter as he missed many series due to injuries.

His bad luck seems to not leave his side as recovery from injury is still in question. The medical team is assessing Rahul’s injury and reports have come out that the 30-year-old will have to go through a fitness test before the India- England test.

Talking about the same, a senior Indian Cricket Board official said, “It’s a slow process. His recovery has been slow and that’s not a good sign. We have 3-4 days before the second batch leaves. There will be a light fitness test on Saturday. If he clears that, he will board the flight. If he doesn’t, we will wait for him to continue the recovery process. He is certainly not ruled out at this stage.”

Explaining the recovery process the official pointed to it being slow and said, “There is no timeline at this stage. He is recovering. Yes, the recovery has been slow but we are still hopeful that he will be able to be fit before the Test. If needed, he will be sent at a later date after he completes his recovery.”

KL Rahul had a decent Indin T20 League this year in which he made 616 runs in 15 matches. The Indian opener had an impressive average of 51.33 and a good strike rate of 135 throughout the league. The Indian team is currently hosting South Africa in a five-match T20I series. The series leans on the visitor’s side with a lead of 2-1. 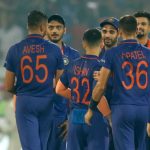