The 67th match of the Indian T20 League 2022 saw Bangalore beat Gujarat by eight wickets. With this comprehensive victory, the Faf du Plessis side have ensured that they remain in the race to the playoffs. However, they can only proceed to the playoffs if Mumbai manages to beat Delhi on Saturday.

As far as the game is between Bangalore and the Gujarat-based franchise is concerned, the 2016-finalists were asked to chase 169, and they did it rather comfortably. In what turned out to be an icing over the cake, it was Virat Kohli who played a match-winning innings.

The batting maestro scored a superb 73 from 54 balls. His knock consisted of eight fours and two sixes. This innings comes as a huge sigh of relief to not only the Bangalore-based franchise, but also his fans. It is to be noted that Kohli has been going through a lean patch of late. Prior to this knock, he wasn’t really at his best.

As a matter of fact, he has scored three golden ducks in the ongoing 2022 edition itself. Nevertheless, his performance against the Hardik Pandya-led side saw him winning the player of the match award as well. The 33-year-old spoke about how he hasn’t been able to fire this season. Further on, he drew light on his knock.

“I can keep going. It was an important game. I was disappointed that I haven’t done much for my team and that is what bothers me, not the stats. Today was a game where I was able to create an impact for the team. Puts us in a good position. There are expectations because of the performances that you have put in. You need to keep the perspective right.

With the very first shot of Shami, I felt I could hit lengths balls over the fielder’s head. I knew that tonight was the night when I could kick on. It has been wonderful that I have got so much support in this edition. I am forever grateful to all the love that I have never seen before,” said Virat Kohli during the post-match presentation.

In the meanwhile, the fans were delighted to see Kohli get back to the groove. Several people took to Twitter to congratulate the Indian batter on his top-class knock. They were happy to finally see him get back amongst the runs.

Here are some of the Tweets:

Virat’s enjoying his batting this evening. The good shots and the streaky ones. Not the modern day great searching for form, but the boy who loves his cricket is on the field tonight. #RCBvGT #ViratKohli

Hey king, you dropped this 👑

#ViratKohli
The king is back 👑
Run – machine is back 🦁
Kohli is back 🐐 pic.twitter.com/hfrEQdLhH2

God finally listened to him!

Moral of the Story: Nobody can stop you, nobody, if you work hard and have the will, not even God, even he will support u❤👑#ViratKohli pic.twitter.com/9YPWFsfSkh

73 off 54 in a must win match 🔥
He's back 😭❤️!
The King is back 😍
Well played champ @imVkohli 🙌❤️#ViratKohli pic.twitter.com/jVFYfDDivy

Out of words. Don't know what to say
Can I say the king is back. No, I don't believe that
Because he is always in form for me.
I am not a fan of winning #ViratKohli
I am a fan of @imVkohli ❤🙏 pic.twitter.com/Ztc4wXiiCC

Today's innings is all that we wanted from a long time 💉#ViratKohli pic.twitter.com/Rwf3l2NSVT 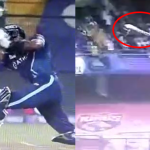