The seventh edition of the Pakistan Super League (PSL) is due to begin in the last week of January. Karachi Kings had a poor last season as they finished fourth in the points table. The team won five and lost as many as games.

Naturally, the owners and stakeholders would be planning to bring the campaign on track for the upcoming season. Now, the Kings have posted news of a ‘big announcement’ and have left fans and spectators guessing. A lot of fans speculate the news might be related to the captaincy announcement and feel Babar Azam will be leading the Kings.

Currently, Pakistan’s all-rounder Imad Wasim is leading Kings. He has done a decent job and led the team to a title finish in 2020. Meanwhile, Azam is in the form of his life as took Pakistan to semis in the recently completed 20-20 World Cup. He led from the front and finished as the tournament’s leading run-scorer, with 303 runs.

Presenting you the captain of Karachi kings. pic.twitter.com/4GVd9VlHwI

The Kings management might feel tempted to give the captaincy reins to their star batter. Meanwhile, Imad might feel hard done by the decision, if Kings announce Azam as the leader. Imad’s all-around skills coupled with the handling of players was lauded by one and all. The announcement update by the franchise has kept fans interested and they can’t wait to know what is in store for Kings. 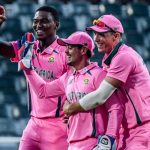