England’s veteran cricketer, James Anderson was dropped from England’s Test team in the last Test series against West Indies. There were speculations that Jimmy Anderson’s Test cricket career is over. What followed was a change in captaincy and Anderson has made his way back into the Test team.

After being asked to bowl first, Jimmy Anderson and Stuart Broad produced another master-class spell in the first 10 overs. James Anderson, in particular, looked threatening right from his first over itself. He gave little room to the batsmen. He started with a maiden over and followed it up with a wicket-maiden.

In his second over of the innings, James Anderson had Will Young caught by Bairstow at slips. In his third over, he accounted for the wicket of Tom Latham with Bairstow taking another fine catch at slip. Anderson didn’t give a single run in his first four overs and also picked the wicket of Young and Latham.

He conceded his first run in the form of a boundary in his 5th over of the innings. He bowled six overs in his first spell of the day and picked 2 wickets for 5 runs, including 2 maiden overs. Anderson came back to bowl just 2 over before Lunch but couldn’t get a wicket.

However, he began the proceedings after Lunch and straightway, picked the wicket of Kyle Jamieson on the 5th ball of the 25th over of the innings. Tim Southee and Colin de Grandhomme then added 41 runs for the 7th wicket but James Anderson eventually had Southee as the latter pulled him straight down the throat of Matty Potts in the 31st over.

At the time of writing, Anderson has picked 4 wickets for 38 runs in 12 overs. The fans were impressed with James Anderson’s brilliant bowling spell and praised him on Twitter. Here’s a look at some of the notable reactions:

This new young bowler England have plucked out of county cricket, James Anderson, is very good!

James Anderson in the first 5 overs:

He will be 40 years old next month, still bowling at its very best – genius.

James Anderson and Stuart Broad who were dropped in the previous Test series of England have picked the first 3 wickets against New Zealand inside 50 balls. World class bowlers showing their class again!

641st wicket for James Anderson, he still has it, started the summer on a high in 2022.

Most Test Wickets at a venue for a Pacer

TWO early wickets for James Anderson, both caught on the slips by Bairstow – what a start for England! 🔥#ENGvsNZ pic.twitter.com/2zTEpEyqey

What a Bowler James Anderson.
Haven't seen anyone bowling so well at 39 after playing 170 matches.
4 wickets for him the the match
Simply amazing

Please someone tell me that James Anderson is not 40Yrs old !! #NzvsEng 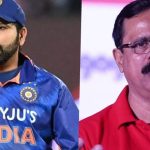