The IPL 2021 has got off to a blazing start and every game till now has been a blockbuster. Same can be expected when two explosive teams, Delhi Capitals and Rajasthan Royals face each other at the Wankhede Stadium.

Despite losing the game, Rajasthan Royals must be proud of their performance against Punjab Kings. Chasing a daunting target of 222, Sanju Samson’s masterclass almost took them over the line. However, Punjab held their nerves to clinch the game.

Ben Stokes injury is a massive setback for the franchise but they have decent replacements available. They’ll probably opt for either David Miller or Liam Livingstone, both of them can be destructive on their day. The batting is not a concern but Rajasthan will expect a better performance from their bowlers. Barring Chetan Sakariya, every other bowler was very expensive. They’ll need to improve their execution in the upcoming games.

Delhi Capitals decimated Chennai Super Kings in their tournament opener and will be very confident going into the game. Prithvi Shaw and Shikhar Dhawan have already given a red signal to the oppositions while Rishabh Pant, Marcus Stoinis, Shimron Hetmyer add brutal power to their batting. With Woakes, Ashwin and Curran at 7, 8 and 9 respectively, Delhi have a lot of depth in their team.

Delhi were without their two best bowlers, Kagiso Rabada and Anrich Nortje in the last game, yet, barring Ashwin and Curran, everyone had a decent game. Nortje has tested positive for COVID-19 thus he won’t be available for selection but we expect Rabada to replace Tom Curran against Rajasthan.

Rajasthan Royals were jolted by a massive blow when Ben Stokes was ruled out of the IPL due to a broken finger. The franchise hasn’t named any replacements yet.

Sansu Samson – Sanju Samson played one of the finest knocks in the history of the IPL and smashed a scintillating 119 of 63 balls against Punjab. He couldn’t take his team over the line in the previous game but he’s love to lead them to victory against DC.

There is some bad news for the Delhi Capitals as well as their premier fast bowler Anrich Nortje has  tested positive for the Coronavirus which has ruled him out of the next two games.

Prithvi Shaw – The youngster has been on a roll of late. After scoring over 800 runs in the Vijay Hazare Trophy, he got his IPL campaign off to a blazing start with a 38 ball 72. He seems to have hit a purple patch thus we expect him to come good in the next game. 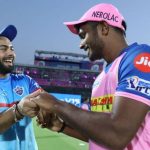 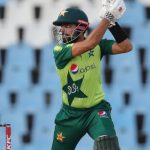