After a temporary halt in the 14th edition of the Indian Premier League due to the Covid-19 scare in the Kolkata Knight Riders (KKR) camp, the T20 Championship will return to action today. The 31st match of IPL 2021 will witness defending champions Mumbai Indians (MI) lock horns against Sunrisers Hyderabad (SRH) at the Arun Jaitley Stadium in Delhi.

Both MI and SRH have experienced different rides in the tournament this year. Mumbai is placed at the fourth position in the points table with four victories from seven matches and makes a case for themselves to defend their title once again. In addition, the team has been unbeaten in Delhi so far.

Sunrisers Hyderabad, on the other hand, is having a poor run in the tournament as they are languishing at the last position with just one victory from seven games. Every game is now a do-or-die match for them if they wish to reach the playoffs. Mumbai will have an edge over Hyderbad as the last time these two teams locked horns against each other, MI managed to register a comprehensive victory by 13 runs.

The pitch at the Arun Jaitley Stadium in Delhi is nothing less than a batting paradise. The last two matches at the ground saw the teams posting 200+ targets. Thus, the viewers should brace themselves for a high-scoring fixture as the pitch has only a little to offer to the bowlers.

Hyderabad dropped David Warner for the last game and brought in Mohammad Nabi. The move, however, didn’t pay dividend. Williamson is most likely to bring in Jason Holder in place of Nabi for the next game.

Since the start of the tournament, Jonny Bairstow has been in fine form. The opening batsman has emerged as a lone warrior for SRH and is expected to make a mark in the game against Mumbai Indians too. In seven matches, the batsman has a stunning 248 runs under his belt at an average of 41.33.

Mumbai Indians may also think about giving Chris Lynn a chance in place of James Neesham.

After a rough start to his campaign in IPL 2021, Pollard finally seems to have regained his form as he was the wrecker-in-chief for MI as they registered a stunning victory over CSK in their previous encounter. While bowling, he managed to pick two wickets of Faf du Plessis and Suresh Raina. The power-hitter caused carnage with the willow in the second innings as he smashed 87 not out to help MI chase 219. The West Indies great is expected to play the key role for MI again as they take the field against SRH. 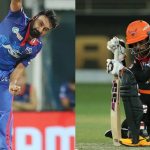