Rahul Dravid’s new commercial advertisement has taken the internet by storm. Everyone is in awe of Dravid’s ‘Indiranagar ka Gunda’ avatar and has praised the former Indian skipper for his fabulous acting. In the commercial for a popular credit card payment app, Dravid, uncharacteristically, gets frustrated after getting stuck in a traffic jam. Generally, Rahul Dravid is known to be a very calm personality but the former Indian opener Virender Sehwag has revealed that this is not the first time he has seen Dravid getting angry.

Talking to Ashish Nehra and Samir Kocchar in a cricbuzz video, Sehwag recalled an incident where Rahul Dravid lambasted Mahendra Singh Dhoni for not finishing the game.

“I have seen Rahul Dravid get angry. When we were in Pakistan, and MS Dhoni had been a newcomer, he played a shot and got caught at point. Dravid was very angry with MS Dhoni. ‘That’s the way you play? You should finish the game.’ I was myself taken aback by the storm of English words used from Dravid, although I didn’t understand half of it.”

“When MS batted the next time, I could see he was not hitting too many shots. I went and asked him what was wrong. He said he did not want to be scolded by Dravid again. I will finish the quietly and go back,” Virender Sehwag revealed.

Earlier, Sehwag revealed that it’s difficult to connect with MS Dhoni as the former Indian skipper never answers his phone. He sarcastically said that even the BCCI secretary couldn’t reach out to him. Sehwag further disclosed that the BCCI secretary gifted a special phone to MS Dhoni, which they wanted him to answer as being the Indian skipper, he needs to be available all the time. 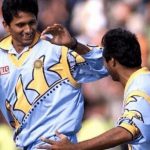