Delhi Capitals suffered a four-wicket loss against Chennai Super Kings (CSK) in the first Qualifier of the Indian Premier League (IPL) 2021. Chasing a steep target of 173, CSK got home with two balls to spare. Needing 13 runs off the final over, skipper MS Dhoni held his composure and calmly scored three boundaries off Tom Curran’s bowling. The 40-year-old remained unbeaten on a run-chase and didn’t let the pressure come to him.

Dhoni scored 18 off just six balls and answered his critics in style, who were questioning his hitting prowess during the ongoing IPL. DC head coach Ricky Ponting, who watched the action unfold live was effusive in praise of Dhoni and said he is one of the greatest players of the game.

“He has been one of the greats, don’t think there is any doubt there,” said Ponting of Dhoni in the post-match press conference.

“We were sitting in the dugout thinking if it will be (Ravindra) Jadeja or Dhoni coming next, I put my hand up straightaway and said I am pretty sure Dhoni will come out now and try and ice the game,” he said.

Tom Curran was entrusted to bowl the last over. He started well by removing Moeen Ali. The pacer though could not maintain his tight line lengths against Dhoni, who punished him by smashing three boundaries. Ponting opined that the pacers erred in their lengths while bowling to CSK skipper.

“We probably didn’t execute as well as we needed to him, and you know that if you miss, he is going to make you pay. He has done it for a long time now, and I think our bowlers just missed their areas a little bit. I think when he is retired, he will be remembered as one of the greatest finishers the game has ever seen,” said the former Australia captain. 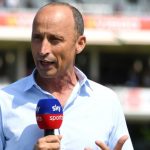