In what comes as big news, India have announced their squad for the upcoming two-match Test series against Sri Lanka. It is to be noted that this will be their first Test series since losing to South Africa earlier in December-January.

As Virat Kohli has stepped down as Test captain, Rohit Sharma is named as his successor, and will lead India in the red-ball series against the Island nation at home. However, Cheteshwar Pujara and Ajinkya Rahane, two of India’s veteran batters, have been dropped from the squad. India’s chief selector Chetan Sharma said that both batters had been spoken to about the decision.

Both have now been told to score runs in the Ranji Trophy. The two of them have been having a torrid time of late, and have struggled to consistently score runs. While Pujara hasn’t scored a hundred in three years, Rahane last scored a century in 2020, against Australia at the MCG. As a matter of fact, both were absolutely poor in the three-match Test series against the Proteas as well.

The Saurashtra batter was able to score just 124 runs at an average of 20.67 in just six innings. On the other hand, the Mumbai batter scored 136 runs in the three Tests. Besides, players like Shreyas Iyer and Hanuma Vihari have been in superb form of late.

Vihari looked really solid during the second Test, and has been scoring runs for fun for the A side as well. As for Iyer, he scored a hundred on debut against New Zealand in Kanpur. However, it is yet to be seen if they do get a consistent run in the XI.

Thank You Pujara and Rahane all the best for your next innings, score tons of runs in the domestics, thank you for so many great games and memories.🏏❤️👏🏽👏🏽🙏🏽

Is it end of road to these players? Only time will tell.

This is very unfair and shameful from BCCI. It's been an hour and they have still not shared any farewell tribute for Cheteshwar Pujara and Ajinkya Rahane. #INDvSL

END of an Era. 🇮🇳 pic.twitter.com/IgVTm7SrtO

Ajinkya Rahane and Cheteshwar Pujara have been dropped from India's Test squad against Sri Lanka. pic.twitter.com/ju4m5eyyZa

Good move.. being the talent that these two are, would be happy if they earn their place back.. but for now, it's time to give others chances#INDvSLhttps://t.co/w6Gave4vod

This was coming. Cheteshwar Pujara, Ajinkya Rahane and Ishant Sharma DROPPED from the test team. #INDvSL

And unless they grind out well in the domestic season, this should be it! No away series to help them either.🥺

Ajinkya Rahane and Cheteshwar Pujara have been dropped from India's Test squad against Sri Lanka. 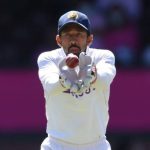