Legendary Pakistan cricketers Shoaib Akhtar, Wasim Akram, and Waqar Younis have rubbished allegations of foul play or match-fixing in India vs Afghanistan match. The Virat Kohli-led India registered a 66-runs victory against Afghanistan in a crunch fixture on Wednesday (November 3).

It was a dominating performance from team India after two heavy losses against Pakistan and New Zealand. India’s batting and bowling clicked, and Afghanistan, who so far have been brilliant in the tournament didn’t have an answer to India’s relentless questions.

Few fans felt it otherwise and started to question Afghanistan’s lack of intent. Twitter was full of negative hashtags such as #WellPaidIndia and #FixedMatch.

What raised eyebrows was few prominent personalities also contributed to these trends by retweeting. Amongst those was Pakistan Minister Fawad Chaudhry, who supported these baseless claims from a few fans. Former Pakistani pacers Shoaib Akhtar, Wasim Akram, and Waqar Younis didn’t like what was trending on Twitter and requested fans to stop the accusations.

Akhter said India played better cricket against Afghanistan and proved why they are considered a strong side. “India could be potential contenders of the semi-finals by winning the next two matches convincingly.”

Akram also agreed to the Rawalpindi Express and felt India’s strong comeback against Afghanistan should not surprise anyone.

“I don’t know why we like to create such conspiracy theories? India are a very good side and they just had a bad start to the tournament. Rohit Sharma is one of the best players in world cricket. Afghan bowlers probably got frozen, we must understand that,” Akram said in his post-match analysis shown on A Sports.

Former Pakistan bowling coach Waqar Younis also felt that such accusations are pointless and need to be stopped right away. India need to win both their remaining games against Scotland and Namibia to harbour hopes of qualifying for the semifinals. They also need either Namibia or Afghanistan to beat New Zealand. 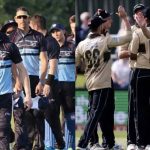