The England Cricket Board have scrapped the position of the national selector and going forward it will be the head coach Chris Silverwood who’ll be selecting the England men’s squad. This would also mean that current selector Ed Smith will vacate his post at the end of April.

Under the new structure, there will be no such panel and only Silverwood will be solely responsible for the selection.

“I would like to personally thank Ed for his contribution to the England men’s teams over the past three years,” Giles said in a statement. “The current process of selecting England teams has been in place for over 120 years. Even though this system has its merits, with advances in technology and a greater information gathering resource at our disposal than ever before, the restructure is in the best interests of helping England men’s teams be successful”. 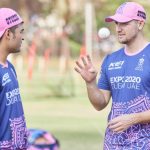