The India England series kicked off with England winning the toss and opting to bat in the first Test in Chennai. Members of the English team were seen wearing a black armband which made many people curious about the same. The reason for this has now been revealed. They’re doing so to pay their tribute to the war veteran and fund raising hero Captain Sir Tom Moore who passed away earlier this week due to Coronavirus. Many cricketers mourned the demise of Sir Tom Moore. In a video shared by the English Cricket Board, skipper Joe Root was seen praising the veteran for his contribution.

“Really sad news, had the pleasure of getting a chance to speak to him at the start of the last year. I am sure his family would be extremely proud of the legacy he has left behind. Someone gave the nation a chance to smile about in these dark times.” 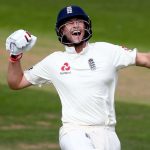