Former England cricketer Geoffrey Boycott has slammed England captain Joe Root for making tactical blunders in the second Test at Lords which allowed India to come back from behind and clinch an emphatic victory. Going into Day 5, England had their noses ahead with India leading by a mere 157 runs and the wicket of Rishabh Pant early in the day further boosted their hopes of a win.

However, little did they know that the Indian tail, which is often criticised for being miserable with the bat, will change the complexion of the game in a session. Mohammed Shami fetched himself a half-century while Ishant Sharma and Jasprit Bumrah made handy contributions that allowed India to declare at 298. Now, who would have thought that at the start of the Day? But it is the unpredictable nature of the game which makes it that interesting.

Anyways, while Shami, Bumrah and Ishant must be credited for their grit, Joe Root needs to be criticised for some poor captaincy. It seems the emotions got the better of the Englishmen. It all started when Bumrah peppered Anderson with a barrage of short balls in England’s first inning on Day 3. Anderson was not amused so when Bumrah came out to bat, the England bowlers tried to give it back to the pacer by bowling short.

In doing so, they strayed away from the best mode of dismissal in England – caught behind, that allowed Bumrah and Shami to get set. Also, Joe Root had opened up the field and there was no pressure on the tailenders which left many English supporters scratching their heads.

“Joe had been doing well with his field placings and captaincy but seeing Jasprit Bumrah at the crease was like a red rag to a bull. He encouraged Mark Wood to just pepper him with fast short balls. It is obvious the England captain and some of his players wanted payback for the working over Bumrah gave James Anderson in the first innings. Heated words were exchanged as England seemed more intent on hitting Bumrah and Mohammad Shami instead of getting them out,” Geoffrey Boycott said.

Boycott further highlighted the vulnerabilities in England batting and said the team is a one-man show at the moment. “England cannot keep relying on Joe for all their runs. There has to be an improvement from the top three very soon because it is getting beyond a joke,” Geoffrey Boycott stated in his column for The Telegraph. 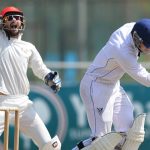