India landed in the UK only a two weeks before the World Test Championship (WTC) and played an intra-squad warm-up game before the summit clash. This led to the Indian fans struggling to get acclimatized to the conditions and expectedly struggled against New Zealand. This led to calls for warm-up matches at least ahead of the five-match Test series against England.

However, Virat Kohli cleared that their request for the same was denied and again, the visitors seemed set to play in intra-squad warm-up matches ahead of the crucial series. But it took a call directly from BCCI Secretary Jay Shah to ECB chairman Ian Whatmore and CEO Tom Harrison for the hosts to agree to India’s request and arrange a couple of tour games.

According to the initial plan, India A and India were set to face each other in warm-up games. But the ‘A’ tour was cancelled due to COVID-19 situation and the travel restrictions and those plans were shelved. Instead a pre-series camp was organized in Durham where the Indian players are told to report by July 14.

According to a report in Cricbuzz, India will play a couple of warm-up games against County teams which is deemed a very good preparation for the visitors before the five-match series. It will take a logistical adjustment for the ECB as their summer is in full flow currently with a lot of cricket being played.

The first Test between India and England will commence on August 4 at Trent Bridge and the tour will conclude on September 14. 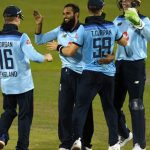