Senior Indian wicketkeeper-batter Dinesh Karthik has made it to the headlines of social media. The skipper and the Indian management decided to drop the senior wicketkeeper-batter from playing XI in the match against Pakistan in the super-4 match. Both teams are facing each other for the second time in the tournament after their clash in the group stage. India won that match by a margin of five wickets.

Although, this omission from the playing XI didn’t go down well with the Indian cricket fans. They took to Twitter to lash out at the management for dropping the senior wicketkeeper-batter Dinesh Karthik and picking Pant in the eleven. They supported the 37-year-old for his finishing skills and also reckoned him as a better choice than Pant to pick in the playing XI.

Why #dineshkarthik dropped against #Pakistan match

Rishabh Pant is the only left-handed batsman in the top 8. Quite understandable why Dinesh Karthik is dropped.#INDvsPAK #INDvPAK #AsiaCup2022

#DK needs to bat left handed to get a place in the team?!#dineshkarthik #cricket

Speaking of the match, then Pakistani skipper Babar Azam won the toss and asked the Indians to bat first at the Dubai International Cricket Stadium. Indian skipper Rohit Sharma and KL Rahul provided a strong start to the Indian team. They both made a partnership of 54 runs in only 5.1 overs for the first wicket.

Rohit Sharma fell prey to Haris Rauf at the individual score of 28 runs off 16 balls with three boundaries. Other than him, another opener and senior batter KL Rahul also scored 28 runs off 20 balls with a boundary and two sixes to his name.

Currently, former skipper Virat Kohli is playing unbeaten on 29 runs off 20 balls with four boundaries alongside Rishabh Pany on four runs. India has scored 109 runs for the loss of three wickets in 12.1 overs at the time this news is being written.

Pakistan won the last match against Hong Kong by a massive margin of 155 runs by bundling them up only on the score of 38 runs in the second innings of the match. 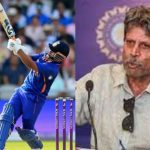