World Test Championship (WTC) scenarios were interesting ahead of the India-England Test series. However, the Joe Root-led side is knocked out of the championship after losing the third Test in Ahmedabad. But there is still a chance for Australia to make it to the final if the series, which India is leading by 2-1, ends in a draw.

It has led to a unique situation of Australia supporting England to set the final date with New Zealand at Lord’s. The Aussie opener David Warner has opined on it as well and has stated that he won’t cheer for England but it would nice to see them draw the series.

“I won’t be barracking for England. From a cricket perspective, we’d like to see a draw [in the series]. It would be ideal for us to make the World Test Championship final and if that happens it’s a great result for us,” the left-hander was quoted as saying by Hindustan Times.

Interestingly, Australia interim head coach Andrew McDonald also recently spoke about England doing the job for them in terms of making it to the WTC final.

“There’s a bit of self-interest there for us. We’ll be hoping they can do the job there. It’s going to be difficult for them, no doubt, some of the surfaces have been conducive to spin bowling and probably India’s strengths in their ability to play spin as well. We wish them well. See what unfolds, it’s out of our hands but we’ll be watching along with interest,” he had said.

Australia, however, had their fate in their own hands until the South Africa tour got postponed controversially due to COVID-19 concerns. 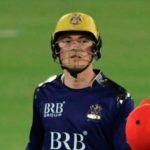