Chopra, on his YouTube channel, said that Kumar’s omission from the team is a little surprising.

“Bhuvneshwar Kumar’s name not being there is a little surprising from my point of view. It is possible he might not have gotten fit till the WTC final or you may not have wanted to take a chance with him,” said Chopra.

While Chopra acknowledged that Bhuvneshwar Kumar might not have regained his full fitness before the WTC final, he said that a swing bowler like Bhuvneshwar Kumar could have been an asset for Team India in the Test series against England.

Bhuvneshwar Kumar has been dealing with injuries for the last couple of years. He has not played a Test for India since India’s tour to South Africa in 2018. He looked in fine rhythm in the now postponed IPL but picked up a thigh injury midway through the tournament.

Bhuvneshwar Kumar has 63 wickets to his name in the 21 Tests he has played for India. His career-best figures of 6/82 came against England at Lords. 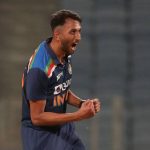