The 10th edition of the Big Bash League (BBL) concluded on February 6 with Sydney Sixers defending their title successfully beating Perth Scorchers in the final. Despite concerns over the longevity of the tournament, the officials had gone ahead with the same format like last year, and this time around, the results are better.

The pulsating final was watched by 1.31 million TV viewers while the playoffs gained a viewership of 5.24 million. This is the first time that the viewership of the finals phase crossed 5 million in the 10-year history. Even the new tweaks like Bash Boost, Power Surge, and X-Factor Substitute generated more interest among the viewers along with three foreign players in the XI.

However, many were disappointed with the umpiring blunders and there were several calls to introduce the Decision Review System. The officials have taken note of it now and look set to introduce a BBL style DRS for the next season after reviewing the whole edition soon according to The West Australian.

“To finish the way it did last night … relief is certainly part of it and pride on behalf of everyone involved. That game reminded everyone how amazing the Big Bash is; we didn’t get as much of that this season, but it was a great reminder of what a great competition it is and how much people care about it.

“It (three imports) absolutely played a role … in some instances that third import turned out to be the star or just added depth. Around Boxing Day onwards, when the English players started to enter, you saw the competition tick up to another level,” the BBL boss Alistair Dobson said. 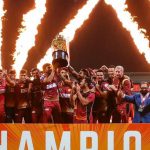