Pakistan skipper Babar Azam has answered the most googled questions about him. In a video posted by the Pakistan Cricket Board (PCB). Babar candidly respond to all the queries. Answering to the first query about where does he live, Babar revealed he stays in Lahore, a city that has produced some of the greats of the game. “Everyone knows, I live in Lahore and the speciality of the city is that you get all types of famous dishes. There are many cricketing legends from this city as well.”

The next question was about the bat he uses to which Babar responded by saying that he always carries multiple bats with him and which one he will use in the match will depend on the country he is playing. “The weight of the bat depends on where I am playing. In different countries, you use different weights. I carry six to eight bats with me. I try to keep less, but the less they are, I get confused. I play with the best only.”

When quizzed about his earnings, Babar didn’t give a clue and said, “I can’t reveal this, but I can say it is less than you think.” The next question was regarding his marriage to which he said that it’s a decision that will be taken by his family. “Even I don’t know that. My family members know and for now, my focus is on cricket.”

Answering the final question about the player he idolises, Babar said he always tries to copy AB de Villiers. “I have tried to copy him many times. He was one of the best during his time. He has performed everywhere, which is why I follow him a lot,” Babar said. 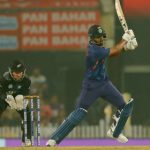