Cricket Australia has confirmed that Alex Carey will make his debut for Australia in Tests in the opening game of the Ashes in Brisbane. Only a few weeks ahead of the much-anticipated Ashes, the skipper Tim Paine stepped down from his captaincy following an off-field scandal dating back to 2017. The outrage on the matter led to Paine taking an indefinite break from the sport citing mental health issues.

This meant Australia not only had to find a new captain in Tests but also Paine replacement behind the stumps. Pat Cummins was named the Australia captain in the whites while Steve Smith was appointed vice-captain. The selectors then zeroed in on Alex Carey and Josh Inglis as two potential candidates to take over the gloveman duties.

And they have preferred Carey thanks to his experience of playing a lot of limited-overs matches for Australia till now. Carey is looking forward to making a contribution to the team’s cause and is excited to play his part in the Ashes. He also thanked his family, coaches and mentors for supporting him right through his career.

“I am incredibly humbled by this opportunity. It’s an exciting build-up for what is a huge series ahead. My focus is on preparing and playing my part in helping Australia secure the Ashes.This is also for my dad who has been my coach, mentor and mate, my mum, my wife Eloise, kids Louis and Clementine, my brother and sister and all of those who have supported me. I will be doing my absolute best to make them and our country proud,” he said according to cricket.com.au.

On December 8 at the Gabba, Alex Carey will become 461st Test player for Australia. 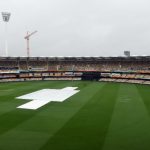