Afghanistan and Zimbabwe played some excellent cricket during the recently concluded two-match Test series which ended in a 1-1 draw. While the Sean Williams-led side stunned Afghanistan in the series opener on a greenish pitch inside two days, Asghar Afghan and his men won the final Test defying great fight from the opposition to level the series.

The caravan of the tour now moves to the three-match T20I series which is set to commence on March 17. Like the Tests, all the matches will be played at the Sheikh Zayed Stadium in Abu Dhabi itself. Like they did in the preceding series, Zimbabwe would love to punch above their weight in the shortest format as well.

Afghanistan, on the other hand, have a brilliant record against Zimbabwe in the T20Is. So far, the two teams have faced each other in nine T20Is and the Asian side has ended up victorious on 8 occasions. Zimbabwe, in the absence of some of their stars, will be hoping to pull off a miracle and it will only be possible if they improve playing against spin bowling.

It will be interesting to see if Afghanistan try some of their new players in this series with T20 World Cup set to take place later this year.

All the three matches will be played at the same venue on March 17, 19 and 20 respectively.

All the matches of this series will be live streamed on Fancode in India. 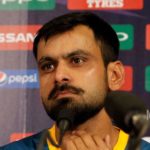