Abu Dhabi T10 League got underway on Friday (November 19). A lot of action was in store for the fans with two matches to be played on the opening day and the superstars of cricket lived up to the reputation entertaining the fans. The opening game witnessed Delhi Bulls winning against Northern Warriors while Abu Dhabi side comfortably won against Bangla Tigers.

Here’s how the action unfolded on Day 1:

After losing the toss, Northern Warriors lost their opener Kennar Lewis in the first over itself. However, Moeen Ali did well to hang around in the middle smashing 35 runs off 21 balls with two fours and as many sixes. Samit Patel couldn’t do much mustering 15 runs, however, the skipper Rovman Powell gave the much-needed impetus to the score.

He literally smashed the ball at will during his 19-ball stay in the middle. Powell scored 38 runs with three fours and a couple of maximums as the Warriors scored 107/4 in their 10 overs.

In response, Rahmanullah Gurbaz got the Delhi Bulls off to a scintillating start scoring 30 runs off just 10 balls. He was trapped in front of the stumps by Imran Tahir but the damage was done by then. The platform was set with a quickfire start and despite losing Rilee Rossouw early, Mohammad Hafeez and Sherfane Rutherford made sure they were on track in the chase.

The duo added 51 runs for the third wicket in 28 balls and the Delhi Bulls got over the line easily with one over and six wickets to spare.

Going by the trend, the Bangla Tigers opted to bowl first in the second game of the day. But the decision backfired on them badly. Phil Salt got out in the first over for Team Abu Dhabi, however, Paul Stirling absolutely bludgeoned the ball later. He was joined by Chris Gayle in the middle and the duo just toyed with the opposition bowling attack.

While Stirling scored 59 runs off 23 balls, Gayle remained unbeaten on 49 off 23 deliveries. Both batters hit 10 sixes and 8 fours among them to power the Abu Dhabi side to 145/4 in their 10 overs.

The chase was always going to be tough for the Tigers and their batters threw their wickets under pressure. Andre Fletcher smacked 24 runs with the strike-rate of 300 but once he got out, they were always chasing the leather. Marchant de Lange was the star bowler for the Abu Dhabi side returning with the magical figures of 5/23 in his two overs.

Bangla Tigers could only reach 105/8 in their 10 overs to lose the game by a massive margin of 40 runs. 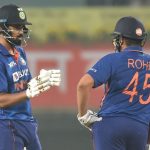 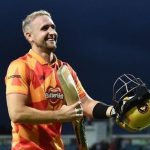